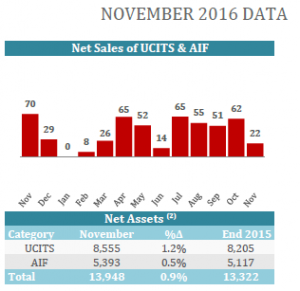 The main developments in November 2016 can be summarized as follows:

The anticipation of faster growth and higher inflation following the election of Donald Trump as American President had an impact on investor demand for UCITS in November: net sales of equity funds picked up, whereas net sales of bond funds turned negative for the first time since February 2016.