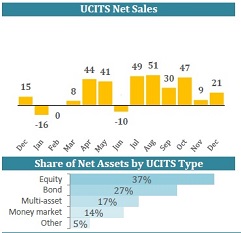 29 associations representing more than 99 percent of total UCITS and AIF assets at end December 2016 provided us with net sales and/or net assets data.

The main developments in December 2016 in the reporting countries can be summarized as follows:

UCITS enjoyed a rise in net sales in December, thanks to higher net inflows into equity funds and a return to positive net sales of bond funds.

The main developments in 2016 can be summarized as follows:

The following comments shed additional light on the main developments in 2016.

Fund assets continued to grow in 2016

Despite multiple adverse shocks, the net sales of UCITS remained largely positive, albeit at a lower level than in 2014 and 2015

Equity and multi-assets were the clear losers in terms of net sales in the UCITS market, whereas bond funds and money market funds emerged as the winners